There is really only one key difference between fixed speed and variable speed drive ; Variable speed drive (VSD) rotary screw air compressors are an increasingly popular choice for companies seeking to reduce energy costs and qualify for energy company incentives. How do you know if a VSD air compressor is right for you? Learn the benefits of VSD, when to use a VSD vs. a fixed speed compressor, and why you may want to consider using both. 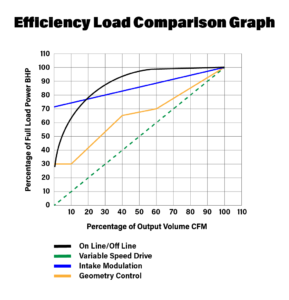 What is a Variable Speed Drive Air Compressor?

A variable speed drive (VSD) controls the frequency supplied to the drive motor on the air compressor in response to real-time demand on the system. When demand is low, the motor will run at a reduced speed, requiring less energy to operate. When demand for compressed air is higher, the VSD will automatically increase the frequency to the air compressor motor to meet CFM demands.

A fixed speed rotary screw air compressor, on the other hand, operates at the same RPM at all times. Instead of adjusting the motor speed, the fixed speed air compressor adjusts the air inlet valve to let more or less air out depending on CFM requirements. Even when compressed air needs are low, the motor is always operating at the same speed, so it is always ready to meet the highest CFM it is rated for.

For example, if you have a 100HP fixed speed compressor with no load from the plant, it may be still consuming 30 to 70 percent of its full load energy. A VSD compressor, on the other hand, will be at nearly zero input energy! A 100HP VSD compressor motor can ramp down to the equivalent of 20-35 HP (depending on the manufacture) when demand is low. As demand increases, it can operate anywhere between its minimum up to to its maximum 100HP. When operating at lower speeds (and when properly sized), a VSD compressor is much more efficient and uses less energy.

A VSD air compressor is able to adjust the amount of power used in response to CFM demand in real time. This provides significant advantages, especially for companies whose compressed air needs vary over the course of a shift, day or season.

Motors controlled by VSD have lower starting currents, eliminating the large spikes in demand seen when a fixed speed motor turns on. When a fixed speed motor first energizes, inrush current can be as high as 600% of operating current. The VSD converter uses a “soft” start/stop during operation, automatically controlling acceleration and deceleration levels to reduce amperage peaks. This, in turn, reduces stress on your internal power distribution. Power companies sometimes impose penalties for large amperage spikes, which VSD can avoid.

A VSD motor optimizes motor speeds and compressor performance. This reduces stress on mechanical and electrical components, prolonging the life of your system and minimizing downtime.

VSD air compressors provide more consistent pressure for plant operations. A fixed speed compressor operates within fairly wide pressure bands due to the way airflow is controlled using the inlet valves. These bands may be as much as +/- 10-30 PSIG, meaning PSI for the system may vary by this much during the course of operation. A VSD compressor uses electronic controls and operates with much tighter tolerances, typically operating within a +/- 1.5 PSIG pressure band. This means much more consistent discharge pressure for all of the applications using compressed air in the facility. Tighter tolerances also mean that the compressor can operate at lower delivery pressures while still maintaining the required minimum working pressure for the system.

Many power companies provide incentives for manufacturers to upgrade to energy-saving systems such as a VSD air compressor. Power companies incentivize these purchases because VSD reduces the overall load on the power grid and minimizes sudden spikes in demand that can overload the grid and cause an outage. These incentives can significantly offset the costs of upgrading to a new VSD air compressor.

When to Use a Variable Speed Air Compressor

The majority of compressed air users could benefit from upgrading to VSD. VSD air compressors provide the biggest energy savings for facilities with high degrees of variation in their CFM requirements. For example:

VSD is also a good fit for applications that must operate within very tight operating pressure tolerances.

When to Use a Fixed Speed Air Compressor

Fixed speed air compressors have lower initial costs, so they can be a good choice for companies with limited access to capital funds. Parts and maintenance are also generally less expensive for a fixed speed compressor. However, it is important to remember that energy savings for a VSD, combined with incentives from your power company, may largely erase the cost difference between a fixed speed and variable speed drive air compressor over time.

A fixed speed compressor may also be more efficient in scenarios where variations in CFM are minimal and the system will always be operating near its maximum CFM rating. Fixed speed air compressors are best for:

Using Both Fixed Speed and Variable Speed Drive Compressors Together

In many cases, the best option is to use both a fixed speed and a VSD compressor in tandem. Using multiple smaller air compressors instead of a single large compressor means that you can keep at least part of your facility up and running while one compressor is down for maintenance or repairs; the second compressor can typically meet about 50% of your maximum compressed air needs. Combining both types of compressors allows you to take advantage of the energy savings of VSD while saving some initial capital expenses with the fixed speed compressor.

When operating both types of compressors in tandem, the VSD compressor should have a larger capacity than the fixed speed. Here’s how it works:

For example, instead of installing one 100 HP variable speed drive that has a CFM range of 150 – 470 CFM, you could install one 60 HP VSD that has a range of 75 – 280 CFM combined with a fixed speed 40 HP compressor that has a CFM capacity of 190. This scenario gives you the same max CFM with the same HP but has a greater overall CFM range, delivering greater efficiency to the system. The system can safely operate at CFM as low as 75 using the smaller VSD compressor alone, while both compressors can work together to meet CFM requirements between 280 and 470 CFM.

This expanded range is beneficial, especially when you have large swings in compressed air demand. With a single 100 HP VSD, you’re fine when operating at the higher end of its range, but if demand drops below the 150 CFM minimum rating, the compressor will begin to cycle on and off. This puts more stress on system components and reduces the longevity of your compressor. The 60 HP compressor will also be much more energy efficient at lower CFM ranges, reducing overall energy costs.

If you’re not sure whether you should choose a fixed speed or variable speed drive air compressor—or a combination of both—an experienced compressed air system engineer can help you decide. Our system designers can analyze your compressed air consumption patterns and system requirements and determine which option will be most cost effective for your needs.