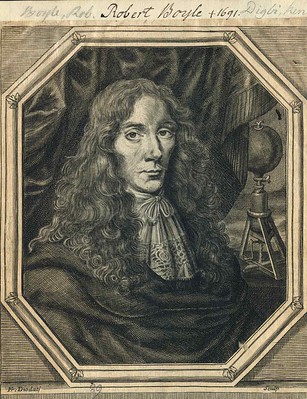 Being in the compressed air industry for over 35 years, you come across many interesting people from the past that have created laws that we are still using today.   Robert Boyle is one of those people.  He was born on January 25, 1627 in Lismore Castle in Ireland.  He published the book “The Sceptical Chymist” in 1661, and many considered his work to be the foundation of modern chemistry.  He dabbled in many areas of study, but with a young university student, Robert Hooke, they found Boyle’s Law.

The experiment was performed using a ‘J’ shaped glass tube sealed on the shorter leg, and open to atmosphere on the longer leg.  Mercury was poured into the tube, such that the level was equal on each side. The volume of the trapped air was noted. Additional mercury was poured into the tube, and it was observed that the mercury did not stay level, and measurements of the heights of each tube leg were recorded.  The height difference of the mercury is effectively a measure of the pressure of the trapped air.  Through the experiment and the data, Boyle discovered a relationship between the volume and the pressure of air.  The data as published, is shown below.

For comparing the same substance under two different sets of conditions, Boyle’s law can be expressed as Equation 2.

Equation 2 looks very familiar.  One of Boyle’s most famous discoveries was to become the first of the gas laws, relating the pressure of a gas to its volume. Combining Boyle’s Law with Charles’s Law, Gay-Lussac’s Law, and Avogadro’s Law; you will have the basis and creation of the ideal gas law;

which includes the major factors that affect a gas; temperature, pressure, volume, the amount of the gas, and the ideal gas constant.

Robert Boyle passed away on December 31st, 1691, and from his work, EXAIR uses the pressure and volume of compressed air for our Intelligent Compressed Air® Products to make them efficient, safe, and effective.  If you would like to speak more about how EXAIR can benefit your pneumatic system, one of our Application Engineers can help you determine the best solution.